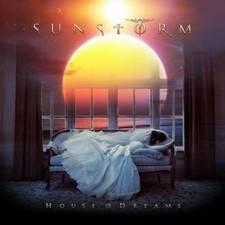 Frontiers Records (www.frontiers.it) is proud to announce the release for the second SUNSTORM album, House of Dreams. This AOR masterpiece, featuring former Rainbow, Malmsteen and Deep Purple vocalist Joe Lynn Turner, will be out in Europe on April 17, 2009.

The first SUNSTORM album saw the light of day in 2006 when Turner accepted Frontiers President Serafino Perugino’s concept to blow the dust off from some potential AOR hit songs that Joe wrote for the aborted follow up to his 1985 solo debut Rescue You. It turned out to be one of the most successful, straight-ahead Melodic Rock releases of 2006. Jim Peterik (ex Survivor, Pride of Lions) supplied additional tracks and the album was rounded off with some other AOR classics picked by Joe and Serafino.

The stunning production, courtesy of PINK CREAM 69’s studio wizard Dennis Ward, was hailed as one of the highlights and key factors to the album’s success. When the second release was being planned, it was a natural choice to ask Ward to be a part of the project again. This time, he played bass and sung background vocals. He also enlisted Uwe Reitenauer and Thorsten Koehne on guitars, Chris Schmidt on drums and Gunter Werno on keyboards.

Once again, Turner dug deep into the archives and found some classy Melodic Rock gems to resurrect. One of the highlights that might sound familiar to fans is I Found Love, a song that Turner often used to open up his concerts on the Rescue You tour. There’s also Forever Now and Save a Place in Your Heart, where another AOR cult-hero Paul Sabu appears among the writing credits.

Serafino also asked Joe to finally release “his” version of the amazing ballad Walk On, that Turner co-wrote with Desmond Child (KISS; BON JOVI etc) for the Jimmy Barnes album Freight Train Heart in 1987. Additionally, Jim Peterik was called in to offer his talents to SUNSTORM once again. The results include Tears on the Pages— a tune co-written by Jon Lind and Russ Ballard. Peterik also contributed, Say You Will and Gutters of Gold. Brothers Tom and James Martin (HOUSE OF LORDS, KHYMERA) wrote the remaining tracks and were able to capture the spirit and quality of songs expected on the SUNSTORM project.

Turner, who recently returned from a tour of Russia with Over The Rainbow, was excited to come home and find out that House of Dreams was coming out in April. He says, “Once again, Serafino and the staff at Frontiers have proved that they know how to cater to Melodic Rock fans. I am glad that they believed in the Sunstorm concept enough to get behind the release of a second album. There are plenty of people all over the world that love this genre of music and I still enjoy making it. It’s also invigorating and rewarding to be able to sing some of these songs that I co-wrote or performed in the 80s that never had a chance to be released properly. Jim Peterik came through again with incredible tracks—well structured with compelling lyrics and melody changes. The Martin brothers also brought in some songs that will probably translate great, live, and that the fans will really enjoy.”

SUNSTORM’s House of Dreams is a real “must have” for all JLT lovers and a stunning release for all Melodic Rock fans.

Final tracklisting includes:
Divided (MP3 sample)
Don’t Give Up (MP3 sample)
The Spirit Inside
I Found Love (MP3 sample)
Say You Will
Gutters of Gold
Save a Place in Your Heart
Forever Now
Tears on the Pages
House of Dreams (MP3 sample)
Walk On

The album will be released on May 19th in the USA via Frontiers/Super D and in Japan on King Records.