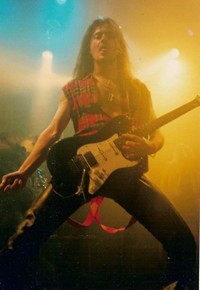 Sven Gali guitarist Dee Cernile peacefully passed away this morning with loved ones by his side after battling stage four lung cancer.

The following message was posted by Liane Conway on his Facebook page, “After such a courageous journey, two days ago Dee told us that he had nothing more to do here and he wanted to pass away to do what he needed to do elsewhere. This morning Dee got his wish and took his last breath. He went so very peacefully with love surrounding him and his hand held. He is now resting in peace. His family would like to thank everyone for all of your love and support.”

When talking about his battle with cancer Dee said, “With stage four lung cancer, in the lymph nodes and bones, my biggest concern was the large tumor in my lung and I knew that the amount of chemo needed to attempt to ‘dissolve’ that size mass would most definitely kill me before even the cancer itself. I began an alternative routine and it helped me slow down the growth of my tumors. I asked for it to be removed and was basically turned down. Left to either do the chemo that I knew would harm me or be left to die.”

Dee himself had posted the following verse:
“It has occurred to me that the days of life are a forgetful MISTRESS.
In my youth I would dance with her night after night with little thought of her being missed by the likes of ME.
Time would be the one missing ‘my’ robust ways and seemingly endless days.
Time would wonder where I am, where I’ve been and what other forces I’ve been with.
But today I found an envelope addressed, stamped and dated. My the hours fly by…
and as wisdom would have it, I discover that my MISTRESS `Time“ has been dancing all along.
I just didn’t see her!
So on behalf of my forgetful Mistress, TIME and my forgetful self,
Please accept this delayed message to YOU, and consider yourself remembered.”

Sven Gali was formed in Canada in 1987 and saw their 1992 self-titled debut gold in Canada on the strength of the singles “Under The Influence”, “Tie Dyed Skies” and the hit ballad “Love Don’t Live Here Anymore”. A year later Sven Gali were nominated for ‘Most Promising Group’ and ‘Hard Rock Album Of The Year’ at the Juno Awards, Canada’s version of the Grammys. Their follow-up release ‘Inwire’ followed in 1995 but was largely ignored in the grunge era and the band disbanded. On August 11, 2007, Sven Gali reunited and played live for the first time in over 11 years at Thorold, Ontario.