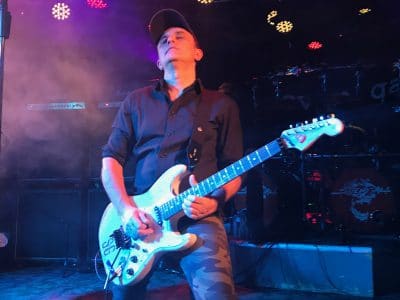 Canadian rockers Sven Gali consisting of lead vocalist Dave Wanless, guitarists Andy Frank and Sean Williamson, bassist Shawn Minden and drummer Dan Fila have released a video for their cover of Triumph‘s track “Spellbound.” The video was filmed at Metalworks Studio, which is located in Mississauga, Ontario, Canada. “Spellbound” appeared on Triumph‘s studio album Thunder Seven, which was released back in November 1984.

Wikipedia states the following about Thunder Seven (with slight edits): “Thunder Seven is the seventh studio album by Canadian hard rock band Triumph, released in November 1984. The second half of the album follows a concept based on various time-related themes. The album was certified gold in the US by the RIAA, with sales of over 500,000 copies, on April 21, 2003, almost nineteen years after its initial release.

“Follow Your Heart” was the band’s highest charting single of the time, reaching #88 in both the UK and the US. “Spellbound” was also released as a single, though it didn’t prove as successful, only charting in Canada and barely scraping the top 100. Thunder Seven was the last Triumph album that did not feature any outside writers. All prior Triumph albums, with the exception of 1977’s Rock & Roll Machine, were written entirely by the band members.”