Canadian rockers Sven Gali consisting of lead vocalist Dave Wanless, guitarists Andy Frank and Sean Williamson, bassist Shawn Minden and drummer Dan Fila have unleashed a video for their latest single “Hurt” from their new EP 3, which was released via RFL Records back on June 12, 2020. 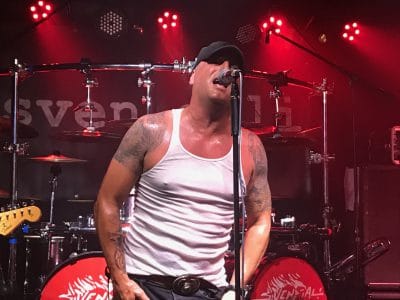 Sleaze Roxx stated the following in its review of 3:

“One semi-decent song — and I use the term “semi-decent” loosely — on 3 is “You Won’t Break Me” simply because it showcases Wanless‘ singing a lot more than the other tracks on the EP and there’s a bit more melody to the song. “Hurt” closes the EP and as previously stated, I haven’t heard the studio version but have heard it the three times that I caught Sven Gali playing live and there’s a YouTube video of the band playing the song live more than 25 years ago! “Hurt” happens to be the best song that can be found on 3 with a good melody line for the chorus but the reality is that it would likely be among the weaker tracks if featured on Sven Gali‘s self-titled debut album. Hopefully, the band has improved the guitar solo for its forthcoming studio version of the track from the disjointed one that can be heard live back in ’93.

Overall, I am glad to see that Sven Gali are finally on the verge of releasing their third album. Unfortunately, the songs on the EP are really nothing like what can be found on Sven Gali‘s debut album and that’s a real shame since trying to bring grunge like material to a “hair metal” crowd just isn’t going to cut it. What I have to come to terms with is simply that Sven Gali are presumably playing what they like with the songs on 3 and they will likely never get back to the type of material that put them on the map in the first place.”