The following message was posted on Sweden Rock Festival‘s Facebook page back on April 14, 2021 (with slight edits): 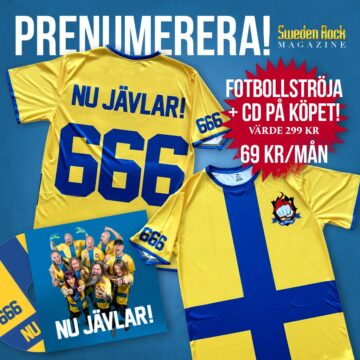 – In these gloomy times, it is liberating to be able to scream “Now damn!”, says Sweden Rock Magazine‘s editor-in-chief Martin Carlsson. We have gathered a fantastic bunch of musicians from Europe, Soilwork, King Diamond, Candlemass, Liv Sin, Pretty Maids, Wolf and Judgment Day.

Jörgen “Schweden-Bomber” Pettersson was a striker in the national team in 1995-2002. He is a hard rocker since childhood and while the other players in the national team listened to disco and dance band he played hard rock. The football set sings in “Now damn!” and has the match analysis ready for it: – “Now damn!” is the absolute best football song ever made. Now damn, now it will be chips and dip!

“Now damn!” has been written by Björn Strid, singer of the internationally successful band Soilwork and Night Flight Orchestra. – I have always liked football songs for championships, says Björn Strid. It started with Denmark’s “We are red, we are white” in 1986 and then “Olé olé olé (the name of the game)” which is mainly associated with the European Championship in 1988. They stuck on the brain and never let go. With “Now damn!”, I wanted to create something with a damn drive that still sets. A song that you can roar with in both at home on the TV sofa and on the football stadium, without becoming boring and predictable. The result was extremely uplifting and really heavy.

Ian Haugland is a drummer in Sweden’s largest rock export Europe. He makes an outstanding effort behind the drums in “Now Damn!”. – I stopped playing football in 1971 and in the same crank I discovered Deep Purple and Black Sabbath. “Now damn!” is my rematch on the football bully that set me to the finish line because I was thick and filled the goal. Here you go! says Europe‘s drummer Ian Haugland and laughs.

Singer Liv Jagrell from Liv Sin contributes with awesome halloween song in “Now damn!”. – Finally a soccer song with features that are also sung in Scanian, Gotland, Hallinner and Nutritionist! Sharing recording with all these awesome musicians is just a bonus. Now damn, we drive this summer! says Liv Jagrell.

Miss for everything in the world not Jörgen “Schweden-Bomber” Pettersson‘s football art and pep dance in the music video “Now damn!” -the wrong link between Twisted Sister’s “We’re Not Gonna Take It” and “We’re Red, We’re White “.

The following is included:

Sweden’s only hard rock newspaper in the mailbox every month