Swedish sleaze rockers, Mandy Sleaze, are in the process of recording their debut EP and have released the song “Runaway” in advance of the EP. 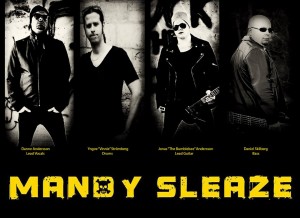 The sleaze rockers’ Facebook page indicates in part [with a few edits]: “We formed back in 2009, we disbanded in 2010 and the real Mandy Sleaze which is us reformed now in 2015 consisting of Jonas, Danny, Daniel and Yngve. We are still on a lookout for someone who plays keys. Our new single “Runaway” is released and has been played on several radio stations in different countries. And the rest of the EP is in the recording process as of now. The EP will be consisting of four songs and will be out there soon for all of you to rock out too….

Everything started with me (Jonas ”The Bumblebee ” Andersson). I made a riff that I thought was so damn good that I called my brother Danny and told him that I think I have done the best riff so far. He agreed with it and we decided to start a band! Shortly thereafter, we recorded a demo on that song which came out to be ”Runaway” and also a cover of a KISS song ”Strutter.” We got good feedback from people who had heard us especially from Myspace where we marketed ourselves! Three weeks after, we released the demo of ”Runaway” on Myspace. Beau Hill, an American record producer who is best known for his work with Alice Cooper, Kix, Winger, Streets, Warrant, Fiona, Europe and Ratt, contacted us and wanted to start working with us. So we recorded the song again, sent everything to him and he mixed and mastered the song. We started to grow a real fan base. But all band members quit only days before our first show which was sold out. Soon after that, Mandy Sleaze died. But lately, I started posting up some guitar videos just for fun and also to show people how good I am and Sweden’s biggest rock radio station noticed it and Mandy Sleaze soon reformed thereafter. Danny and I started working on new Mandy Sleaze tunes so we are recording our first EP now and it is starting to look bright once again and this time we are here to stay.”