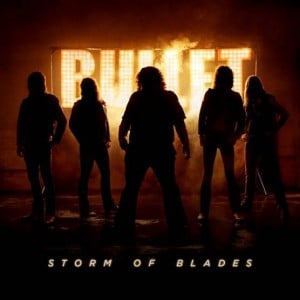 We’ve only just put the New Year’s Eve fireworks behind us and welcomed 2016 with a bang as Steamhammer/SPV prepare to announce their latest signing: Swedish act Bullet, one of the most powerful and highly visible metal bands of our time, has signed for a worldwide deal with the Hanover based label.

The quintet from Växjö is among the most active groups on the Scandinavian metal scene. At the moment, Bullet are writing songs for an album that they aim to release in early 2017. Guitarist Hampus Klang: “We think we’ve found a good formula and direction, both in terms of our music and our songwriting. The new material will be even more heavy metal-oriented than before. We’ve written some fast songs that are very NWOBHM-inspired.” Bullet will record at the Pama studios in Torsås, Sweden, again, with drummer Gustav Hjortsjö doubling as their producer.

Klang and his colleagues are thrilled with their new recording contract: “We’re proud and happy to be signed to a legendary label like Steamhammer/SPV. It feels great to have a new start with a new record label.” Olly Hahn, A&R Steamhammer, is also extremely pleased: “I’ve known the band since their first album and was totally impressed when I saw them live for the first time. Now I feel very honoured that they have decided to join the Steamhammer family for their future releases. I know that the next album will consist of more heavy metal dynamite and can’t wait to start working for them!”…

Jörg ´Schrörg` Düsedau (Dragon Productions), in charge of the booking now, agrees: “I really look forward to my upcoming collaboration with Bullet! And to reaching the next level in cooperation with the band, their management and Steamhammer/SPV. When I saw Bullet at the Metal Hammer Paradise, I found myself standing in the second row towards the end of their show. That hasn’t happened in years. What a live band – real metal without frills. World domination’s next!”