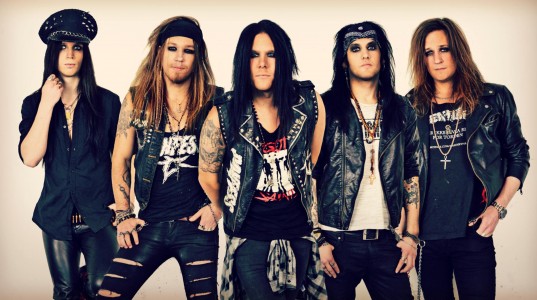 “For six years, Denver and Lucky raised hell together with us and therefore we want to thank them and wish them nothing but the best, they surely will be missed! But now it’s time to look forward and take Confess to new heights! As from today, a new chapter in Confess’ history begins. It’s time for us to proudly present the new members to you, give it up for:

We’re beyond thrilled to have these two maniacs on board and we can’t wait for you all to see them in action! A new era for Confess has begun, the new blood is boiling and a new album is in progress, so let’s fucking make 2016 a year to remember!”

Speaking exclusively with Sleaze Roxx, Confess‘ frontman John Elliot was asked for how long have the band known that each of Denver and Lucky would be leaving the group and he replied: “Well, they left for different reasons both of them. We kinda sensed that something was different the last couple of months. We will always stay best friends with the guys and wish them nothing but the best. I mean, we practically lived together for six years.”

With respect to how Confess ended up getting each of Richie and Van Noice in the band, Elliot stated: “Richie and Sam [drums] are childhood friends and I’ve known the guy for like seven years. He’s always been around and helped the band in all kinds of ways so he was like a no-brainer choice for us. And regarding Mr. Van Noice… I don’t really remember how we met him but I think we ran into each other a couple of years ago at a club in Stockholm [Sweden]. We knew that he recently split ways with his old band so we asked him to come down for a jam and it clicked instantly.”

In regard to Confess‘ upcoming album, Elliot expanded on what was contained in the band’s Facebook message and explained that, “We’re starting the recording of the new album this month. We got a hell of a album coming up, that’s for sure. When it will be out exactly I can’t say. It all depends on record companies and so on. But it’s in the making!”