Swedish melodic hard rockers Reach are back with some new music but as a power trio rather than a four piece this time around. The group has just released a video for its title track from its new studio album The Great Divine, which will be released in Japan on February 21, 2018 and the rest of the world on February 23, 2018.

Reach‘s biography on its website states (with slight edits): 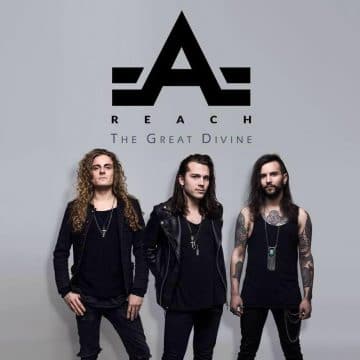 Reach was put together in 2012 by drummer Marcus Johansson and guitarist Ludvig Turner. Together they started looking for band members to complete the group, and found the remaining band members in bass player David and singer Alex. Among the first things Reach did to reveal this new rock band was to arrange a hard rock cover of Avicii‘s super hit ‘Wake me up‘, in August 2013. A huge success and now the video got over 2.000.000 views AND still counting.

Reach‘s music can be described as classic rock with strong melodies and hooks, complemented by their youth energy. You can hear influences from Whitesnake, Scorpions, Europe and Gary Moore in the songs.

Ludvig also put the melodic rock on the map in Swedish television in 2014 by making his own interpretations of major hits and being among the final four in the Swedish Idol contest.

The band released early 2014 a single ‘Black Lady‘ to show their song writing abilities and later that autmn in 2014 having secured a record deal the band released a first single ‘You Called My Name‘ from their album ‘Reach Out To Rock‘, which was released on March 4, 2015.

In February 2016, Reach released a acoustic version of the album track “Tell Me” digitally and a music video of the song. The new single also includes their cover version for the song “Wake Me Up” by Avicii, that previously only been released as youtube video.

Reach is changing the team constellation – and becomes a power trio with Ludvig Turner fronting!

Ludvig is already known nationally for his singing ability taking part in the TV show Idol 2014, so it felt naturally that he picked up the singing as well and playing the guitar, backed by Marcus Johansson on the drums and the new guy Soufian Ma’Aoui on bass.

The “new” Reach played at the Stockholm Rocks Summerfest on July 23rd!

New music and videos will be up soon.”

Reach – The Great DivineSingle available on all digital formats and Title track from the Album “The Great Divine”. The album will be released the 23rd of Feb…