Two members of the Swedish sleaze rock group Confess are departing the band but the remaining members have already found replacements. Confess bassist Lucky and guitarist Denver are no longer in the band. 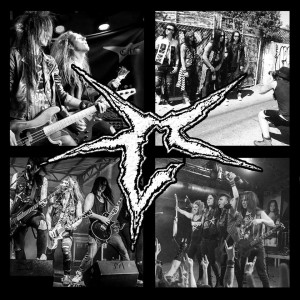 Dear friends and families of Confess,

As you’ve might have noticed, it has been pretty quiet from us in the last couple of months. Mainly because of a lot of work, energy and focus have been put on writing and preparing the upcoming album, but also to find a dedicated, loyal and ass kickin’ replacement for Denver… and me.

A couple of months ago I notified John, Sam and Blomman that I no longer could give Confess my full attention and that I had no other solution than to resign. There’s absolutely no drama, bad blood between us or what so ever, and I will still contribute in what ever way I can to keep spreading the word of the Centagram.

The reason why we haven’t announced anything until now is simply because we wanted to find replacements before rumors like “the end of Confess” started to spread. We solved the problem before it even became a problem. To clarify: new unquestionably devoted members have filled the empty spots and will be presented to you in a couple of days SO STAY TUNED! These two bad asses will not disappoint you at all, so there’s absolutely NO DOUBT that Confess will continue to flourish.

Believe me when I say that this band and all it’s been giving me over the years have been life changing in ways that some can’t even begin to imagine. I sure as hell will miss hitting the road and meet all of you crazy bastard but it’s time for me to step back and make room for someone who can give it all! I wish John Elliot, Samael, Blomman and the new guys the best of luck in their future endeavors. I sincerely want to thank everyone I’ve met and got the chance to work with on this crazy ride. I hope from the bottom of my heart that we’ll meet again someday! Hasta la vista, baby!

Sleaze Roxx stated the following about Confess‘ last album Jail in its review back in June 2014: “Wrapping it up, Confess kick ass — there really isn’t much more to say about them. If you are an ’80s metalhead, grab this album. You will swear it was released during that decade, and even though it wasn’t this band has it right. Sex, drugs, and metal! I would be ecstatic if Confess charted in America, it would mean that everyone here woke up and remembered what real music was.”