Sweet & Lynch to do new album in 2017, tour and possible line-up possibilities

Great news for Stryper, Dokken and Lynch Mob fans as Stryper frontman Michael Sweet has announced to The Blade Runner Show in a video interview (see below) that he would be teaming up with former Dokken and current Lynch Mob guitarist George Lynch for a second Sweet & Lynch studio record in the first half of 2017.

Sweet stated as follows in the video interview: “Well, we did one album, It did very well. And we are doing another album… We are planning that now. The goal is to go in the studio at the same time that Stryper goes in to record their next studio full-length and do them at the same time. So between January and June of 2017, that’s happening…. And it’s going to be good man! I am really excited about Sweet & Lynch. I was very bummed we didm;t tour. We are going to tour next year — even if it’s two weeks — hopefully, more than that. We are going to tour. And we have another album coming out. George is working on some other ideas. We are going to start. I am producing it again… It’s going to be amazing! We’re excited!”

In terms of who will be playing on the new Sweet & Lynch album, Sweet stated: “Well, I would like to use Brian Tichy and James Lomenzo again but if they are not available or too expensive or all of the above, I am going to hire a couple of other guys.I just worked with a guy named Will Hunt on my solo album. He plays drums for Evanescence and a number of other bands — Black Label, Sebastian Bach — he’s phenomenal. I love Will — one of my best favorite drummers in the world! So it may be him. Who knows? Bass players — we’ll have to see. Maybe, ur, I love this guy who plays for Slash — Todd Kearns. Good looking guy, great singer, great bass player — so maybe him.”

Sweet went on to state: “…Everything is all about scheduling. People are busy and they’re in demand and they’re out working. It’s hard to get them locked down. But you know, you’re talking about a week of their lives so I have enough time to do that and I am going to shoot for it.”

Sleaze Roxx stated in its review of Sweet & Lynch‘s debut album back in early 2015: “If you’re taking the time to read this review, then chances are you know the resumes of the musicians involved — so I won’t waste my breath talking about their accomplishments and skills. I will, however, sum everything up by saying Sweet & Lynch‘s debut album is what you should expect from four talented artists playing at their best. Only To Rise is filled with great melodies and amazing guitar work from 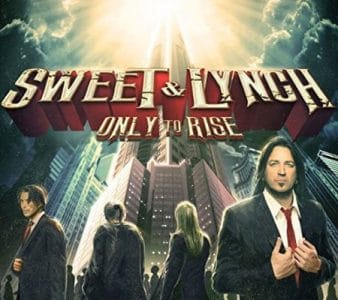 George Lynch — some of his riffs and leads take me back to Dokken‘s Tooth And Nail and Under Lock And Key albums, while a few of the guitar driven songs remind me of the first Lynch Mob album. And those of you that have followed Michael Sweet since Stryper‘s comeback already know that the frontman has been on a mission, and his voice is in the best shape of his career. Also, let’s not forget his writing and production abilities, both of which are nothing short of brilliant.”

Sleaze Roxx concluded in its review: “If you are fan of any of these artists, or just a hard rock connoisseur in general, Only To Rise is a must have. I know it’s early in the year, but I will go out on a limb and say that this album will probably be noticed as one of the best of 2015. Sweet & Lynch, representing the top talent in the music business today, have made an album to compete with other ‘super-groups’ such as The Winery Dogs with their brand of straight-up hard rock — so jump on board, and let these twelve songs take you on a rock ‘n’ roll journey.”