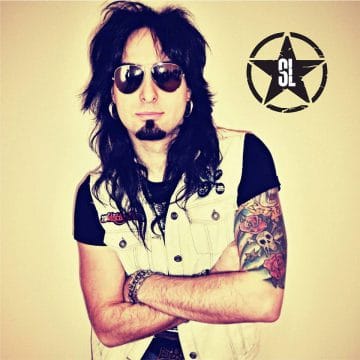 In regard to how Sweet Leopard came to be, Kit stated (with slight edits): “With Pedro, we’ve known each other for 14 years and so long we’re playing. The history of the band dates back to 2007, when we founded the band Lipstick Killer. After a year, Lipstick Killer was dissolved and we played in various bands. At the end of the year 2011, I put together a band Sweet Leopard. J.C. Smith replied to our advertisement in a rock magazine and then I met Sany Angelo in a pub. So the band has been active since 2013.”

With respect to Sweet Leopard‘s future plans, Kit advised (with slight edits): “We have many plans. Twice a year, we organize the Sweet Fest Festival in our hometown where play mostly glam metal bands. The last of our guest was Chris Holmes of W.A.S.P. In the nearest time, we will make a new video and by the end of the year, we want to make another one. Right now, we are working on the new album and we would like to record next year. And on Christmas, we are playing a special acoustic gig.”

You can read the rest of the interview with Sweet Leopard guitarist Michael Kit at The New Wave of Hair Metal’s Facebook page.