Good news for fans of singer/guitarist Michael Sweet and guitarist George Lynch as the duo who have a project called Sweet & Lynch have completed their second studio album alongside bassist James Lomenzo and drummer Brian Tichy. Earlier this month, the group announced that a video was shot for the single “Walk” from the upcoming new studio album entitled Sweet & Lynch 2. It is expected that the new album will be released sometime around October 2017. 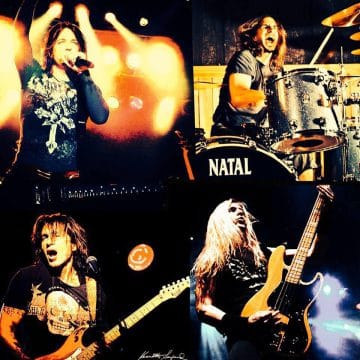 The following message was posted by Sweet on his Facebook page earlier today:

“It’s always bitter sweet finishing an album. You have the memories of making it and the joy of hearing the music you created together in the end, but it’s also a little sad to see it come to an end. I guess it’s fulfilling to know that there is always a chance of another album in the future, Lord willing.

I got to know everyone a little more this time around. I hung out for four days with James Lomenzo and Brian Tichy and it was an absolute joy to work with such gifted musicians and such great people. I hung with George Lynch during the video shoot and talked a lot during the recording and George definitely is not only a ridiculously talented song writer and guitarist but he also has an amazing sense of humor. We laughed a lot during the making of Sweet & Lynch 2. Laughter is so important to creating something great. I believe we’ve created a very special album and I can’t wait for all of you to see it and hear it. I’m so honored and blessed to be able to work with such talented people.

I’m also blessed to be able to work with Frontiers Music srl, Lisa Champagne Sweet, Danny Bernini, Paul McNamara, John O’Boyle, Kenny Lewis, Charles Foley, Robbie LaBlanc – it would not happen without any one of you. We’re all important pieces of this beautiful puzzle. Thank you?

Sleaze Roxx stated the following in its review of Sweet & Lynch‘s debut album Only To Rise: “If you are fan of any of these artists, or just a hard rock connoisseur in general, Only To Rise is a must have. I know it’s early in the year, but I will go out on a limb and say that this album will probably be noticed as one of the best of 2015. Sweet & Lynch, representing the top talent in the music business today, have made an album to compete with other ‘super-groups’ such as The Winery Dogs with their brand of straight-up hard rock — so jump on board, and let these twelve songs take you on a rock ‘n’ roll journey.”