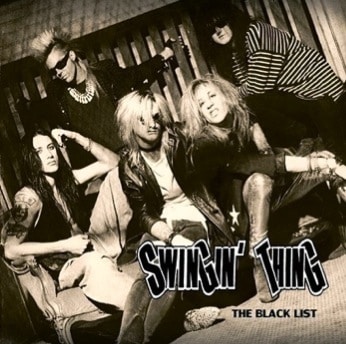 SWINGIN’ THING IS BACK WITH NEW ALBUM ‘THE BLACK LIST’

Fifteen years in the making and the kings of the Sunset Strip return! Swingin’ Thing is back with The Black List – 14 never before heard recordings that will blow your mind!

Straight from the Glam & Sleaze vaults, Demon Doll Records and Swingin’ Thing have teamed up to hand pick the songs that would have encompassed the first major label release from the band. Including never before released versions of “Supersonic”, “All That Glitters” and “Do You Feel Alright”, The Black List will bring you back to the glory days of the Sunset Strip when the boys reigned supreme, sold out shows were the norm and signing major label record deals were all in a days’ work!

Be the first to hear “All For The Love Of Rock ‘N’ Roll” (which was going to be released as the first single on the Encino Man soundtrack), soak in the self destruction of “D.I.Y.”, “Pills”, “Manic Meltdown” and “1994′. Get smashed up by the boys’ version of “I Got A Right”, a cover that even Iggy himself would be proud of. This album will literally melt your face off! Also included in the booklet, is the history behind the collection of songs and the story of the era from which they came, written by guitarist Sunny Phillips.

Every step of the way, Swingin’ Thing have been with us to make this record. From choosing and arranging the songs, to mastering the album, to peeling the flyers of the wall to make the album cover (which was actually going to be used for the major label release), to the glass mastering from which the album was silver pressed!

The Black List is exclusively available from demondollrecords.com and this album will sell out!

Order your copy today before the first pressing is gone! Shipping Worldwide!