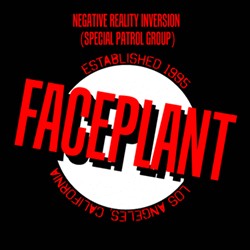 1994, Hollywood, California, and the landscape had changed — no more were the Sunset Strip bands in vogue. Swingin’ Thing (at that time going under the name The Things) had a tough decision to make and unfortunately for all of us fans, Paul E. Bardot and the boys parted ways… but new things were on the horizon.

Sunny Philips, Chris Penketh, Henry Kelly and Mike Penketh formed an in-your-face punk rock outfit called Faceplant and Demon Doll Records and the boys have reached far back into the Hollywood vaults to bring you the recordings that have never before seen the light of day.

Prepare to be kicked in the head as the boys are bringing the noise something fierce. Armed with a new outlook and attitude, Faceplant entered the studio and hammered out 12 classic tracks that will get your blood boiling and your fist pumped in the air. From the opening notes of “Halfway Dead” to the infectious outpouring of “F.I.A.” they deliver a sonic assault to the senses with a no nonsense approach that rips the cover right off the record.

The remaining four members of Swingin’ Thing were not going down without a fight… kicking, screaming and clawing their way back; this album encompasses the everyday struggle of life on the streets of Hollywood.