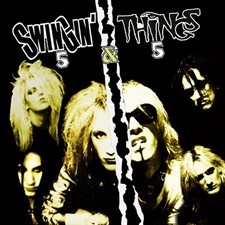 Swingin’ Thing is back… one more time! Demon Doll Records and the boys have teamed up for the forth time to bring you the split CD ‘5 & 5’ which includes the last 5 songs ever recorded by the group under the moniker ‘The Things’. These were incredibly difficult to come across but well worth the wait!

In 1994, times were changing on the world famous Sunset Strip but the boys were still swinging. They absolutely tear the cover off the ball as they unleash yet another sonic assault. This dynamic masterpiece is a split CD featuring 5 re-mastered songs from Swingin’ Thing that have not appeared on any other Demon Doll release to date. This CD includes the studio version of “All That Glitters”, “Hazy, Lazy, Crazy Daze Of Summer”, “For You”, “Cats Got Your Tongue” and “Hey Kidd”.

In addition are the last 5 songs ever recorded by the five piece including the ferocious, gutter induced punk rockers “Addicted”, “Negative Trend” and “Truth Decay”, as well as covers of X’s “Desperate” and Adam Ant’s “Press Darlings”.

Another trip to the vault brings us back yet another lost treasure from Paul, Sunny, Michael, Chris and Henry! This album is silver pressed, licensed from the band, and includes liner notes with a time-line of their most important milestones. This officially completes the Swingin’ Thing/Things collection! Demon Dolls have now proudly released 42 songs by the group and every single one them kicks our freaking ass!

So get this last piece of history from this remarkable quintet and get it early, as we are offering this record at an introductory price of $12.99 exclusively available at http://demondollrecords.com/swingin_thing__the_things.