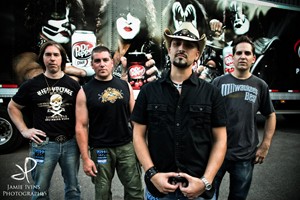 A founding member of Switchblade Suicide, JJ had been with the band since its inception in 2006 . “It’s always tough to have someone leave, moreover, a friend,” stated guitarist Geoff Jewett and vocalist Denis Vasconcelos. “We know that it was a tough decision for JJ and we wish him all the best.”

Replacing JJ on bass will be Alex Linardi. Alex is a veteran to the music scene and has performed and recorded with many bands throughout the New England region. His resume includes Misery Divine, Everyday Disaster, Soliton Code and most recently the Iron Maiden tribute band Beast Over Boston.

Upon news of JJ’s departure, Switchblade Suicide went into high gear to find the right bassist. “We auditioned at least a dozen players before finding Alex,” stated drummer Barry Silver. “The melodic lines and new ideas Alex played during his audition really got us excited about what could come once he got into the comfort zone. We are ready to start a whole new journey with Alex and build on the great music, fantastic fan support and press reactions of past few years. So stay tuned for some more rock’n’roll in 2012!”

Switchblade Suicide is a prolific, original rock band colorfully described as the bastard child of hard rock and heavy metal, devouring the riffs of the ’70s (KISS, Aerosmith), the driving dominance of the ’80s (AC/DC, Guns N’ Roses), and the remorseless angst of the ’90s (Alice In Chains). Compound these sounds and “The Blade,” as their fans have dubbed them, personifies the next incarnation of raw, ruthless rock ‘n’ roll, refusing to replicate.

Switchblade Suicide has performed throughout the East Coast United Stated and has supported national touring artists KISS, Queensryche, Cheap Trick, Squeeze, Dizzy Reed (Guns N’ Roses), and members of Quiet Riot, Warrant, and White Lion. With a sound and vibe that is uncompromising, unapologetic and unbridled, Boston-based Switchblade Suicide will infectiously inject you with a lethal dose of original rock ‘n’ roll… just what the doctor ordered for the revival of rock music.