Sylent Storm featuring band founder and lead vocalist Jym Harris are working on their debut full-length album, which will be titled The Fire Never Dies and released in early 2020. 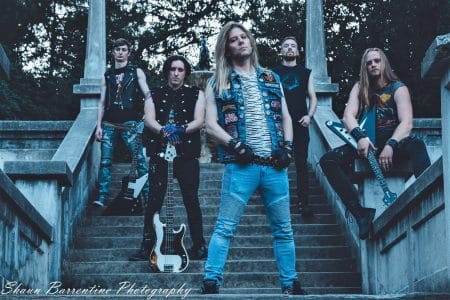 “Medford Oregon’s tradional US power metallers Sylent Storm have entered the studio to record the follow-up to their 2018 self-titled demo EP. The Fire Never Dies is the band’s first full-length album and will be released in early 2020 via Stormspell Records.

Lead vocalist and founder Jym Harris says “in the last year, we have really found our voice. The newer material shows the style has grown since the EP came out last December. We are changing things up a bit and carving out our own identity in the NWOTHM.”

In addition to brand new material, the album features four newly recorded songs from the 2018 EP; “Eye of the Storm”, “Witches’ Blood”, “Patriots of Metal”, and “Betrayal.” Fan favorites like “Beware the BloodMoon”, “Shadow In The Dark”, and “March Forth” are represented as well.

In support of the 2020 release, Sylent Storm will be playing several US live dates across the west coast, and select festival dates, which will be announced shortly at www.SylentStorm.com.

Official video for “Patriots of Metal”, taken from the self-titled EP released by Stormspell Records ©2018.Recorded by Chris Slocum at Jackson Street Studios…