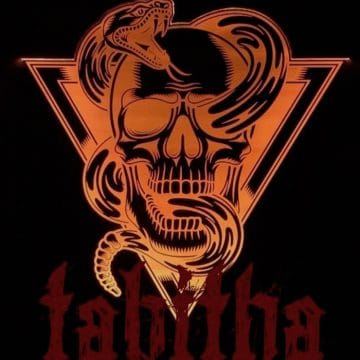 Skitso on vocals, Jarred Anderson on bass and John Clarke on drums.  The quartet is working on a debut release of eight songs for March 2019 as well as live shows in the Brooklyn and Manhattan areas come spring.

Speaking exclusively to Sleaze Roxx, Dennis D advised: “Tabitha is a side project from Tiger Claws. We are super excited to get this together and we are looking forward to getting on stage and delivering a show you will not soon forget.”

When asked why the band doesn’t have a Facebook page, Dennis D indicated: “Facebook isn’t a thing this band uses. We offer our music, not narcissistic photos of what were having for lunch, etc. We can respect Facebook and its community but we want anyone interested in us to focus on songs and music, not the quality of production or anything else. We like the raw production sound and we record most of the time in analog — honestly and organically. If if gets too polished or cookie cutter,  we will bring it back. Tabitha is a new band with new rules, new options. We can’t afford a [renowned producer] Michael Wagener so we will keep on creating the music we like first and foremost. If you don’t like it, God bless. If you do enjoy it, God bless. We are experimenting with many things. The world of rock n’ roll has no rules at this time. We are just an honest rock n’ roll band. We are up front and happy to be here.  We will continue to work the best we can with what we have to offer — good time party rock n’ roll music to people who want it.”