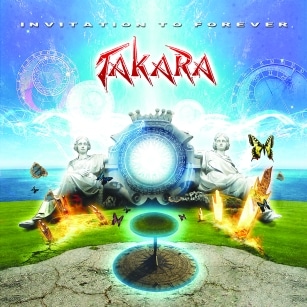 TAKARA was originally formed in August of 1987 by guitarist Neal Grusky. In 1990, Takara with Jeff Scott Soto producing and singing, entered into the studio to record new songs what would become their debut CD. In 1992 Takara added new members, Robert Duda/Drums and Gary Schutt/Bass who would become a part of the Takara debut CD.

Zero Corporation (Japan) and Now and Then records (Europe) offered Takara a record deal and “Eternal Faith” was released in December 1993. This CD entered the Burrn Charts at number 16, and European charts at number 8. Things werebeginning to happen for this young rock band.

After a number of albums that included charting in Japan and various line up changes, Takara is returning with once again new band members and new attitude. Fans who have stuck by the band through all the changes and years of waiting will be pleased with what’s in store for Takara in 2008. Takara is reemerging in 2008 with several albums coming out at consecutively. For this new release Takara have added Brazilian vocal sensation Gustavo Monsanto to the band, as wellas Yngwie Malmsteen drummer and bassist Patrick Johannson and Bjorn Englen, as well as long time Takara keyboardist Brook Hansen and a special return by Jeff Scott Soto on backing vocals.

Neal Grusky had this to say: “It is with great pleasure that I’m announcing that Takara has signed to Shawn Gordon’s LabelProgrock records. I am very excited about this new Takara album “Invitation to Forever”. Our new album has all the distinctive trademark sounds that you might expect from a Takara album, just with a little bit more edge than previous albums.We feel the match between Shawn and Progrock and Takara will be an incredible partnership in a very modern, and ever changing music business terrain. Shawn being a musician understands the needs of his bands, and works to find acompromise that in the end, the fans and press will agree that is the new future for the industry.”.

“Yet again I get to work with a band I’ve been a fan of, and local to me to boot. What’s great about working with Neal is that he really understands the business part of this business as well as being an amazing musician, so it’s a simple matter to jump back and forth between topics, not to mention this is a smoking album that is a great listen.”, said Shawn Gordon, President of ProgRock Records.

“Invitation to Forever” is the ProgRock Records debut release from Takara and can be found athttp://www.progrockrecords.com/artists/view.php?id=107.The album will be released in mid October 2008