Big news for Talas fans as a new studio album from the veteran New York state band will be recorded and released via Metal Blade Records. 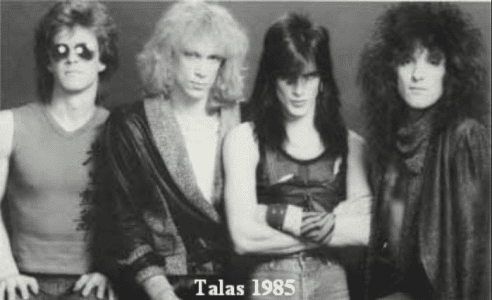 Wikipedia states the following about Sheehan‘s time in Talas (with slight edits): “Sheehan‘s first full-time band was Talas, a power trio with Dave Constantino on guitar and Paul Varga on drums. The band played a mixture of cover songs and original material, and all three instrumentalists alternated on lead vocals.

Talas was a popular local band in Buffalo for over a decade, attaining a cult status which spread into the northeast US and into Canada. In 1978, Talas released their eponymous debut album, which generated the regional hit single, “See Saw”. It was during this time that Sheehan wrote “Shy Boy” (later re-recorded with David Lee Roth), and “Addicted To That Rush” (later re-recorded with Mr Big).

In the late 1970s, Sheehan also played in a band called Light Years with drummer Ron Rocco who had earlier played in a band called Black Sheep with Foreigner singer Lou Gramm in Rochester, NY. After Sheehan returned to Talas, they opened a show for UFO in Buffalo. This led Sheehan to an association with guitarist Michael Schenker and also helped land him the job touring with UFO in 1983.

Talas‘ first national exposure happened in 1980, when they opened thirty shows for Van Halen. However, success was elusive, and even as their brand of what came to be known as “glam metal” gained popularity over the next few years, Talas remained an unsigned act, partly due to poor management. They independently released their debut eponymous “Talas” LP on Evenfall Records (reissued by Metal Blade) and then “Sink Your Teeth Into That” on Relativity Records.

Seeking to take Talas further than just regional success, Sheehan reformed Talas with another drummer (Mark Miller), guitarist (Mitch Perry, also later of Heaven), and a dedicated vocalist, Phil Naro, with whom in the late 1970s Sheehan had previously worked in his side project (the Billy Sheehan Band). Talas would release only one more album, Live Speed On Ice. After Mitch Perry left the band, he was replaced by Johnny Angel, who played guitar with them for their 1985/86 US tour opening for Yngwie Malmsteen’s Rising Force. There was a fourth Talas record, tentatively titled “Lights, Camera, Action” to be issued on Gold Mountain/A&M, but it never got past the demo stage due to Sheehan leaving to join David Lee Roth‘s solo band. Talas did briefly continue on under Phil Naro sans Sheehan, enlisting Jimmy Degrasso on drums, Al Pitrelli on guitar, Bruno Ravel on bass and Gary Bivona on keyboards but by this time Talas was dead and Ravel formed Danger Danger.”