Mr. Big, The Winery Dogs, The Fell and Sons Of Apollo bassist Billy Sheehan was recently interviewed by Eon Music and spoke about his former band Talas. 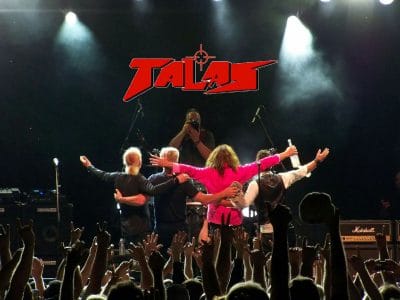 Sheehan advised: “There were two Talas’s; one was the original version that we toured with Van Halen; myself and two other guys, and then we did Talas version two. We hit it pretty well; we toured all over the USA, opening for Yngwie Malmsteen all around the country, and we actually ended up being more popular than the original Talas, because we played outside of Buffalo a lot. The drummer Mark Miller was a particularly amazing drummer, and as a matter of fact, Mike Portnoy often cites Mark as one of his inspirations. Dream Theater would get together and play a couple of the Talas songs in an early formation, because they were all fans of the band – which is pretty cool!

In terms of how the reunion of that version of Talas came about, Sheehan stated: “Mark Miller, I hadn’t seen him in a long, long time, and he came out to see a Winery Dogs show, and it was just great to see him and his daughter, and his wife. And I realised right there that his kids had never seen him play! His daughter’s in her twenties, and he’s got a son and a granddaughter too, and I thought; “Hey, why don’t we put together a little thing, where we get the original band together, and do a benefit show?”. So we did a benefit for a fire department in Rochester, New York, and we had so much fun. The audience roared so loudly, for so long.
​
Sheehan also talked about whether the reunion show was recorded for a future release as he stated: “We did record it audio and video, so hopefully those recordings will represent actually what happened. It was just great to hang for the first time in thirty-three years. We did a couple of reunions with the original Talas, but now those guys are kind of out of the biz, and they don’t want to play anymore, so it was wonderful to go out and do a show with these guys. Mark Miller built his own drum kit; he bent the metal bars that he’s mounting the toms on a tree! When we first got together, we found out that we had to do an acoustic show the next day, and he went home and built his own cajón. We just had a marvellous time, so at some point we’ll try to put that CD / DVD out, and maybe we can make it so that the proceeds go to the fire department, or some such thing so it will serve a worthy cause.”

You can read the rest of the interview with Sheehan at Eon Music.

Talas performing “The Farandole” at Bands at Barnard in Rochester, New York, USA on July 19, 2017: