Many Sleaze Roxx readers are likely familiar with Canadian heavy metal rockers Kick Axe who have had three of their albums — Vices (1984), Welcome To The Club (1985) and Rock The World (1986) — recently reissued by Rock Candy Records.

The Ottawa Metal ’80s – ’90s Facebook page recently shared a funny story involving Canada’s Royal Canadian Mounted Police — which likely was very far from funny at the time — about Kick Axe who were touring throughout Canada back in 1986. 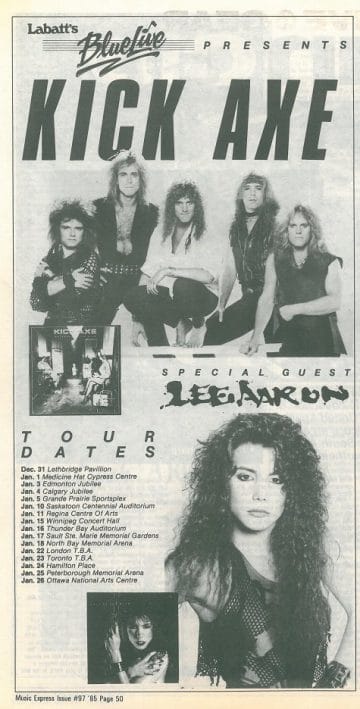 The two albums promoted in this ad here are Kick Axe‘s ‘Welcome to the Club‘ (Aug ’85) and Lee Aaron‘s ‘Call of the Wild‘ (Jun ’85). Kick Axe had just entered the Billboard charts, and Lee Aaron was nominated for a Best Female Vocalist Juno Award. For a hard rock show to be booked at the N.A.C., it seemed like a good time for both bands.

And then the RCMP stepped in and seized all of Kick Axe‘s gear.

It happened in Winnipeg on January 15th, 11 days before the Ottawa show. Unknown to Kick Axe, their manager had been involved in criminal business activities and owed a lot of money. Here’s how the band found out:

Victor Langen (Kick Axe): “It was a sold-out show there with Helix and we were closing out the show and there were all these uniform guys. I saw them and thought maybe they’re crowd control, it wasn’t anything to be alarmed about. We had seen that before in our heyday, security people coming out on the stage at the end. Anyhow, we finished the night and we didn’t even get to do an encore because the sheriff goes ‘Gimme that guitar, boy!’ … That was it, they took everything and loaded it into a semi trailer and we had a show to do the next night in Thunder Bay, Ontario. We had to share the equipment with the other boys. We had no guitars, nothing.” [Metal-Rules.com, Sept. 7/05]

The remainder of the Kick Axe dates were cancelled, and Lee Aaron stayed home. – RC“