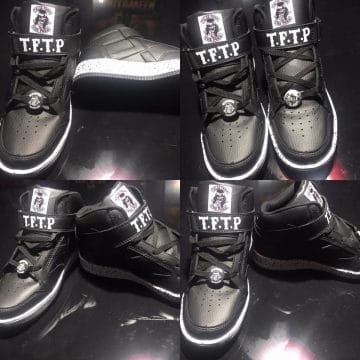 “The following was posted presumably by guitarist Andy Sun on the group’s Facebook page yesterday: “It’s my friend, due to the immense success of @tftp_official’s merch exhausting everything in just one day of show, I decided to raise the pattern by creating our own dunk high This is already mine!!!! Who liked a like! And who wants to inbox us here or by our face book! Few units of size 40 to 42. Commemorative Edition of the tour! #Sneakers #Dunkhigh #Tftp #Tennis #Merch #Band#Araya #Andinholindo #Motley #Poison #Ratt the bands that excuse me…. #Chupakiss”

Tales From The Porn‘s “Back To The 80s” extended video:

NEW SONG ALERT!!Here´s the official video of the song Back To The 80s from our debut album H.M.M.V (out September 15th- Animal Records)Directed by Alexandre …