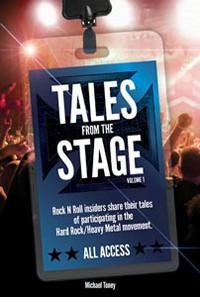 ‘Tales From The Stage’ Book Coming On June 29th

‘Tales From The Stage, Volume 1’ is a nonfiction book consisting of in-depth interviews with music professionals that helped shape the hard rock and heavy metal movement.

‘Tales From The Stage, Volume 1’ has announced their line-up, as well as the release date of the book. “We couldn’t be more thrilled with our line-up and the content that will appear in our first volume of Tales from the Stage.” says Michael Toney, the book’s author. “The music pros that we interviewed were asked dozens of personal, as well as touchy professional questions, and they held nothing back with their answers. It’s A 238 page journey through the hard rock and heavy metal movement with 15 of the best tour guide in the business.”

An official release date of June 29, 2012 was announced today, with pre-orders being taken now at talesfromthestage.com. “It’s exciting for us to come in a little bit ahead of schedule on such an amazing project.” says Toney. “We originally announced a July release earlier in the year, but the entire process materialized smoother than we anticipated.” The eBook format of the book will be also be made available June 29, 2012.

‘Tales From The Stage, Volume 1’ has partnered with the non-profit organization, Ride for Dime (RFD). A portion of all book sales will be donated to RFD which is committed to furthering music education for America’s youth. Michael Toney also co-authored the book ‘Tales From The Cage’, which was of a similar format, focusing on the sport of Mixed Martial Arts.