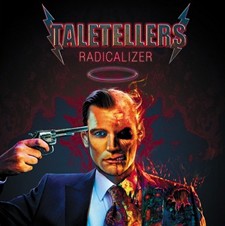 The Taletellers are gearing up for the releases of their new album ‘Radicalizer’ on April 29th through Metalville Records.

Taletellers were formed in late summer 2005, with Alan Costa and Stefan Kuhn being the first band members, after Alan Costa split up his previous Band Taletellers Soulsellers.

That is also where the band name Taletellers derives from as Alan explains: “For me the story of TALETELLERS starts with the forming of my very first band Taletellers Soulsellers a couple of years ago. After that band eventually split up I took some of the songs with me and Stefan and I decided to make TALETELLERS the new band name, because we wanted to show that the new band marks a new start, but to show also that the music was still very much rooted in the first band”.

After completing the new line up with Pascal Louis and Ben Graf, the first vital sign of the band was the EP “The Missiles of Mercy”, which was self-released by the band in early 2007 and very good reviews in the underground rock and metal press. The song “Bad Motherfucker” was #1 for more than six months on several Internet Music Charts, and was voted “Track of the Day”, “Track of the Week”, “Best Lyrics” and “Most Rocking Track” several times.

In summer 2007 Ben Graf left the band and was soon replaced by Sebastian Berg.

This caught the attention of Hammersound who offered the band a record contract in 2008. The band took the chance and “Detonator” was officially released throughout Europe in September 2008.

Critics were generally positive towards “Detonator”.The Swiss metal magazine Metal Factory gave it 9/10 in a review.

In 2009 the band embarked on their first European Tour supporting Grave Digger and Alestorm. They played in 23 cities across Europe including Germany, France, Spain, Italy, Slovenia, Croatia, Czech Republic and Belgium.

Back at home, the band began writing new material and in 2010 teamed up once again with producer Phil Hillen at SU-2 Studio to record the second album.

During the recordings Pascal Louis left the band and was replaced by Michael Morgenthal.

After several months of scouting the label world Taletellers teamed up with Metalville to release their second full-length album “Radicalizer”, due out April 19, 2011 in North America.

The phenomenal artwork for “Radicalizer” was once again designed by Mark Wilkinson, who did all Taletellers artworks until now and who is known for his work for Judas Priest, Iron Maiden, Jimmy Page, The Who, Marillion and many others.