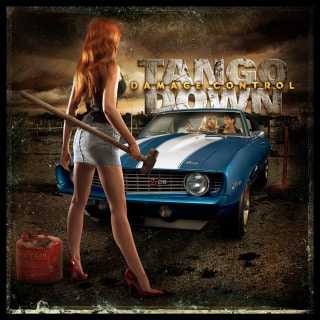 TANGO DOWN COMING WITH NEW LOOK, ATTITUDE AND ALBUM

Tango Down has have been honing the new material and line up the past few months, by opening for such acts as Tyketto, La Guns (w Phil Lewis), Stephen Pearcy, Firehouse and Dokken. All to positive crowd response. Scott Miller says, “I’m excited as the new material is guitar crunchy , drenched with big vocal melodies. Also we have been doing a lot of playing out live road testing the songs. So far the feedback has been thumbs up on all of it. Which has been a lot of fun for us. Ty Sims has been doing a bang up job on producing our cd. We loved what he did with Farcry, that there was no argument from me when the label said they wanted him behind the board.”

Ty Sims had this to say about the new album. “Its shaping up to be a really good disk. It should please fans of the melodic rock genre, as it has elements of bands like Firehouse mixed in with the crunch of bands like Lynch Mob. This is a new band in every sense from the first release. I think it will surprise a lot of people.”

Tango Down will also be performing on the main stage at this years South Dakota Rockfest with Bret Michaels, Skid Row, Dokken, Firehouse, La Guns, Enuff Z nuff, and a few of our labelmates, Bombay Black, Farcry and Talon. Its going to be a party for sure…hope to see everyone there!

You can pre-order Damage Control which is due July 21st, at www.kivelrecords.com. All pre-orders made by July 1st will get a signed 14×20 poster from the band. You can also hear the 1st single either by going to www.myspace.com/kivelrecords OR www.myspace.com/tangodown.

The bands album cover and band photos were designed and photographed by Award winning designer and photographer Stephen Jensen of F3 Studios. Also, for some of you reality TV show fans, the album art features VH1’s DAISY OF LOVE contestant/star Chi Chi !