Tango Down have released a new song entitled “Punching Bag” for streaming from their upcoming new album Bulletproof. 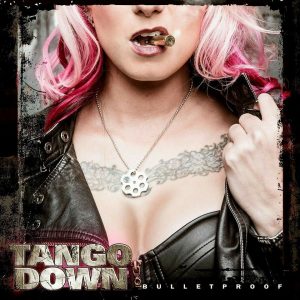 The following was posted on Tango Down‘s Facebook page in that regard:

Well we got the green light from the powers that be to drop the first single from the upcoming BULLETPROOF. So ……put ’em up….put’em up…..PUT’Eeeeeem UP. For PUNCHING BAG!!!
It’s GO TIME!! Someone ring the bell!!! Tango Down is BACK, BIGGER, BADDER and BULLETPROOF!!!”

Sleaze Roxx stated the following in its review of Tango Down‘s 2012 album Identity Crisis: “On the follow-up to 2009’s Damage Control, Tango Down recruited [David] Reece to replace the departed Alex Barbeiri and welcomed bassist Chris Konys back into the fold. The result is a very satisfying melodic rock album that sounds more like classic Bangalore Choir than that band’s current Metaphor release. Identity Crisis is all about over-the-top harmonies and an endless supply of guitar hooks — not unlike label mates Farcry, partly thanks to the flawless production of Bombay Black‘s Ty Sims.”

Perhaps not surprisingly, Tango Down have yet another lead vocalist with this time, Chas West (Bonham, Lynch Mob and Red Dragon Cartel) now handling the singing.