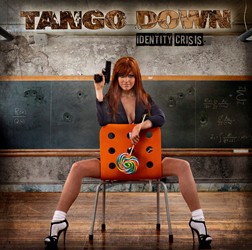 Tango Down Team With Bangalore Choir Singer On ‘Identity Crisis’

Kivel Record’s Tango Down is kicking 2012 off opening for none other than Y&T, just in time to drop a NEW album ‘Identity Crisis’, with their new vocal madman, none other than Mr. David Reece of Bangalore Choir and Accept fame. Believe us when we say, that he delivered beyond our expectations and we can’t wait for all to hear. We are very proud of what was accomplished on this album.

So without further adieu we want to unveil the bands new album cover. ‘Identity Crisis’ was photographed by award winning photographer Kent Miller, who has worked with the likes of Steven Tyler, Beyonce, Eddie Van Halen and to many to name. Album artwork was designed by renowned illustrator/graphic designer Thomas Ewerhard, who has created such fine pieces of visual art for the likes of Avantasia, Edguy, Testament and many more. This winning team delivered the goods and then some! We hope you dig it as much as we do.

You can pre order the CD now at www.kivelrecords.com starting Monday, November 28th. All pre-orders will receive a signed poster of the album cover and band 8×10 (quantity limited to the first 100 pre-orders). The release date for ‘Identity Crisis’ is March 2012.

Not stoping there, Tango Down have shows booked, and kicking them off they will be opening for the great Y&T in March. On March 3rd the band will open for Y&T at Chance Theater in Poughkeepsi, NY followed by a March 4th appearance at The Rock Junction in Coventry, RI. More shows will be announced for the month of March and April in the coming months.

Says singer David Reece, “I’m really excited to get the chance to play live with Tango Down again, and showcase the new record to you all! I hope to see you all at these shows!”

Continues guitarist Scott Miller, “We can’t wait to get out there! Dave is the man and playing with him has been a blast!! He delivered on this album and will blow alot of people away. He is a pro and went above the call to deliver IMHO a stellar performance that can’t be rivaled. We are excited to play these new songs live. Not to mention opening for Y&T!”