Tango Down are working on new songs for the follow-up album to their critically acclaimed album Bulletproof, which was released back in 2016. Bulletproof finished as the #2 album on Sleaze Roxx’s Top Ten Albums of 2016. Tango Down are aiming to release their follow up album sometime in 2018. 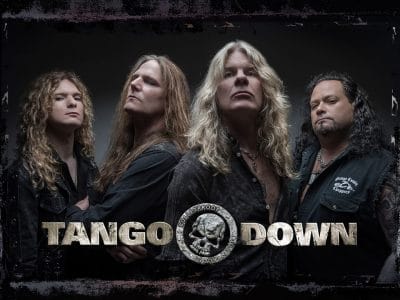 “A year ago this week we dropped the song Punching Bag, from what was to be our soon to be released new album, Bulletproof.

It’s been a wild year for us, and we can’t thank you all enough for being there. From the shows, festivals, emails, meet and greets and everything in between. You are not just fans or customers. You are our family!

So here’s the update. We are getting things done over here! So far 5 songs have been completed, and we are still working on the rest. We are not going to rush it, as we want it to be the best Tango Down album yet. Bulletproof is a tall act to follow, but we think we can pull it off! We have a lot of ideas, demos, old songs, new songs. So bear with us as we shift through it all.

The 5 new songs are seriously killer. Especially the latest one, penned between Scott and Jason Pawlak who is a big part of our machine. We can’t wait for these to drop.

Axel K Gessner also chimed in on his wall the other day about what is going on. See below post from him in his own words.

He couldn’t be more right. So, Get Stoked! As Tango Down (Chas, Scott, Axel and Keith Michaels Ruggiero) will be back with a new album in 2018!!

Also don’t forget to support our boy Chas when he drops his solo album on Frontiers records later in the year.

Much Love
Tango Down!”