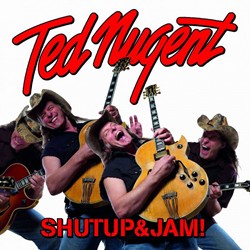 Ted Nugent Gets Ready To ‘Shutup&Jam!’ In July

“Shutup&Jam! 2014… the unstoppable firestorm of Ted Nugent, all American MotorCity, high energy R&B&R&R soul music erupts once again with what many gungho music lovers are raving to be the best songs and best music and highest energy rock out of my insanely wonderful musical American Dream,” Nugent exclaims. “Sammy Hagar sings his balls off on ‘She’s Gone’ and Derek St. Holmes proves once again that the MotorCity produces not just the greatest guitar grind masterlicks ever but one of the most powerful soul voices of all time on ‘Everything Matters!’ Unleashing early July 2014. Read em & weep! Shutup&Jam! you know who I am, you know where I stand, so Shutup&Jam! I am!”

“When I first heard Ted’s demo of this song, I immediately responded with ‘I’m in,'” Hagar shares of his involvement on the track “She’s Gone”. “Ted’s ripping the guitar like the days of old… very inspiring to sing to a track like that-old-school blues riff, hard edged rock ‘n roll on fire!!!”

To coincide with the release of ‘Shutup&Jam!’, Nugent has announced that he’s packing up and hitting the road. On Saturday, June 7th he will join Black Sabbath, Alice Cooper, Volbeat and other rock titans at the Sweden Rock Festival in Solvesborg, Sweden. He’ll then prepare for his national headlining tour, kicking off July 3rd in Wichita Falls, Texas. Ticket info for all shows is available at tour.tednugent.com.

Recognized as the world’s leading guitar showman, Nugent’s no-holds-barred career spans five decades of multi-platinum hits. From the ground breaking Amboy Dukes’ “Journey To The Center Of The Mind”, to classics like “Stranglehold” (ranked in the Top 100 Classic Rock Songs and #1 Guitar Lick) and “Cat Scratch Fever” (32nd Best Hard Rock Song of All Time), Damn Yankees chartbuster “High Enough” and cult classic “Fred Bear” (the most requested song for radio airplay in Michigan and Wisconsin).

Nugent was recently named Detroit’s Greatest Guitar Player of All Time by readers of MLive. For millions of passionate music lovers everywhere, Nugent delivers the Ultimate life soundtrack. A Ted Nugent show is not just a performance — it’s a firebreathing celebration!