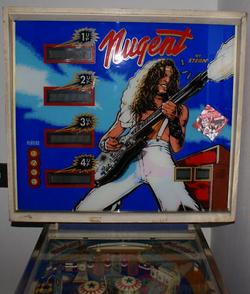 An autographed Ted Nugent pinball machine is being sold at this eBay.com location.

The auction states, “This is one of my most prized possesions but I am offering it up for sale to make some room and pay off some bills. I surely do not need to sell this but I would like to see it go to a Ted Nugent rock and roll fanatic. It is probably the only pinball machine like it. I personally had Ted sign the flippers, two plastics, and an original flyer. I was lucky enough to be able to go back stage at a 2008 concert where I got to meet him and ask him if he would sign some stuff for me. I have included a picture of me standing next to him while he signed the flippers. It is located on the machine where the score card goes. Ted is an awesome guy and signed anything I wanted. Included in this auction will be the pinball machine, original flyer, guitar pick, back stage pass, and an 8×10 signed picture.”

Courtesy of www.sleazeroxx.com and www.ebay.com