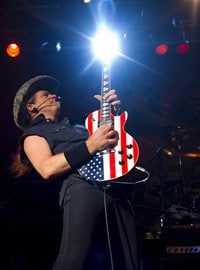 The U.S. Secret Service is looking into a violent rant by “Catch Scratch Fever” rocker Ted Nugent in which he denounced President Barack Obama and his top advisers as “evil” and urged National Rifle Association members to help “chop their heads off in November.”

“I’ll tell you this right now: If Barack Obama becomes the president in November, again, I will either be dead or in jail by this time next year,” Nugent said. “We need to ride into that battlefield and chop their heads off in November. Any questions?”

Nugent, speaking at the organization’s annual gathering over the weekend, praised NRA members but warned that if they did not “get everybody in your lives to clean house in this vile, evil, America-hating administration, I don’t even know what you’re made out of.”

“If the coyote’s in your living room, pissing on your couch, it’s not the coyote’s fault. It’s your fault for not shooting him,” he said.He also denounced the administration as “criminals” and said a Democratic victory in November would mean “we’ll be a suburb of Indonesia next year” — an apparent reference to Obama’s boyhood time there.

Secret Service spokesman Brian Leary told Yahoo News: “We are aware of the incident and we are conducting appropriate follow-up.”

And a spokeswoman for Mitt Romney, whom Nugent has endorsed, distanced the campaign from his remarks.

“Divisive language is offensive no matter what side of the political aisle it comes from. Mitt Romney believes everyone needs to be civil,” Andrea Saul said by email.