The one and only Ted Nugent will be embarking on his The Music Made Me Do It Again California / Arizona Tour 2019 with special guest Alex Cole starting on July 19, 2019. 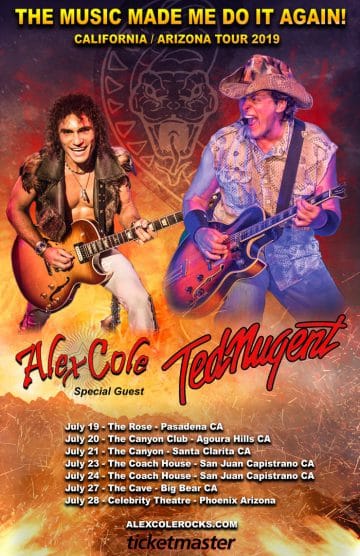 Sleaze Roxx stated the following in its review of Nugent‘s concert in Medina, Minnesota, USA back in July 2016:

“For anyone who gets offended easily, a democrat, or a vegan; I am not sure a Ted Nugent show is something you should be going too. Nugent is one who loves to speak his mind about his political views and how much he loves to hunt and eat the shit out of what he kills. The show kicked off with the band coming out on stage — Greg Smith on bass and Jason Hartless on drums — and then the Motor City Madman did a great rendition of the “Star-Spangled Banner” on his guitar. Once he finished with that, they went right into “Gonzo.” This got the crowd ready for a night of fun filled music and banter from “Uncle Ted.” Next song was the fan favorite “Free-For-All,” and this sounded better live than the studio version. Nugent was sounding great on the vocals and he was just killing it on the guitar. One thing that is for sure, is that Nugent loves the USA and loves all of our troops. He dedicated the next song,“Snakeskin Cowboys” to all of our troops who are fighting to keep everything that the USA stands for.

Nugent does a fantastic job keeping the crowd entertained between songs and also makes them feel that they are part of the show. He was interacting with the crowd between all the songs, and during one of those times, he mentioned that he did the calculations and that this show was his 6,534th show (don’t quote me on that as I was trying to remember the number as I wrote it down).”

Ted Nugent‘s “The Music Made Me Do It” video:

Ted Nugent – “The Music Made Me Do It” (Official Music Video)

The Music Made Me Do It (Official Music Video)Directed by Darren MannFilmed June 30, 2018 at The Canyon Club in Agoura Hills, CA The first single from Ted Nu…

Promo video of Alex Cole on tour with Ted Nugent:

JUST ANNOUNCED: International recording artist and retro-rock musician, Alex Cole, will be joining Ted Nugent as SPECIAL GUEST on the California / Arizona To…