After 25 years, 12 albums, over 2,500 shows, over 16 million albums sold worldwide, Tesla is stronger than ever. Continuing on that momentum Tesla will release their third DVD, Comin’ Atcha Live! 2008, on June 24 on the band’s Tesla Electric Company Recordings label (in partnership with Ryko Distribution).

“This DVD marks a new era creatively for Tesla because we put it all together ourselves, capturing the band’s concert and life on the road,” says lead guitarist Frank Hannon. “Nowadays, we are more involved in every aspect of our music career than ever before. We are very excited about the creative results and it really shows in the new DVD.”

It’s Tesla’s first DVD in 17 years (since 1991’s Five Man Video Band) and is filled with over two hours of live music, over an hour of special behind-the-scenes footage and never-before-seen material, including footage of Tesla interacting with fans, giving viewers a personal tour of Seattle, and an up-close look at their touring equipment and guitars.

Comin’ Atcha Live! 2008 also marks the world premiere of “Dear Pvt. Ledbetter,” a new song written in honor of the troops from the band’s forthcoming album, which is currently being recorded at bassist Brian Wheat’s studio, J Street Recorders with producer Terry Thomas (who was behind the boards on the band’s 1994 Bust A Nut album) and will be released this September. More details to be announced in the coming weeks.

The DVD was filmed at the Myth Nightclub in Maplewood, Minnesota on February 22. At the sold-out show, TESLA treated fans to numerous classics such as “What You Give,” “Signs,” “Modern Day Cowboy,” “Love Song” and “Little Suzi.”

Tesla has been non-stop touring all around the world the past 12 months in support of their two-disc critically acclaimed Real To Reel covers album. After taking their current hiatus from the road to record the new album of all original material, they’re getting right back out on the concert trail. Their 2008 worldwide tour starts June 6 in Solvesborg, Sweden at the Sweden Rock Festival. After the European dates conclude on June 27, they’ll start a U.S. trek on July 12, lasting throughout the summer and well into the fall. Their summer trek includes a stop in Pryor, OK on July 13 as part of Rocklahoma.

Here are the current tour dates. Fans should stay tuned to the band’s official website and Myspage page for more dates which will be added in the coming weeks. 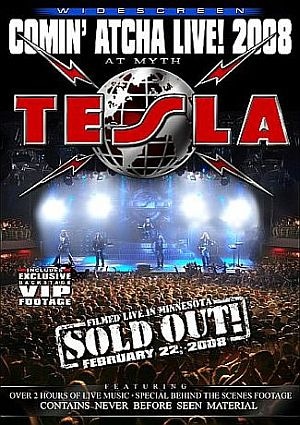