Finnish rockers Temple Balls will be playing their first show abroad on November 10, 2017 when they perform at Loud & Metal Mania 2017 in Tokyo, Japan. 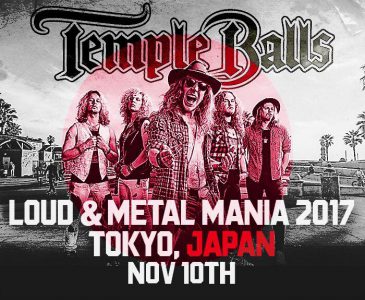 In the time-tested tradition of everyone from Aerosmith to Van Halen, it is the driving, hard hitting drum beats, the massive wall of bass, incandescently blazing fretboard wizardry and the melodic guitar licks that lay the foundation for the band’s brazen classic rock sound, and the things which truly set the youngsters apart from their peers is their sovereignty in things that really matter: memorable refrains, melodic hooks, heartfelt lyrics and the vocalist’s uniquely tinted yet classic singing style.

For the past couple of years, Temple Balls has kept busy, both in the studio and on the stage. Opening for such bands like Queen, Deep Purple and Uriah Heep, the band has proven to be more than able to handle big stages as well. Whether it be a big festival or your local club’s stage, the band will set your friggin’ pants on fire.

The first official single ’ Hell And Feelin’ Fine ’ was released on September 1st 2016. The debut album was recorded at Karma Sound Studios (Thailand) in May 2016, and saw the daylight on February 24th, 2017. ’Traded Dreams’ was released via Finnish record label Ranka Kustannus whose captain is the founder of Spinefarm Records – the label behind such acts like Nightwish, Children of Bodom, etc. After the release in Finland, the album was put out in Germany on May 5th via SoulFood Music. The album was produced by Tobias Lindell, who is known for his collaborations with such bands like Europe, Mustasch and H.E.A.T.

As of spring 2017, the guys are more hungry than ever touring clubs and festivals like never before bringing their sound to the people who are thirsty for rock n’ roll!”

Thank you to The New Wave of Hair Metal for bringing Temple Balls to Sleaze Roxx‘s attention.