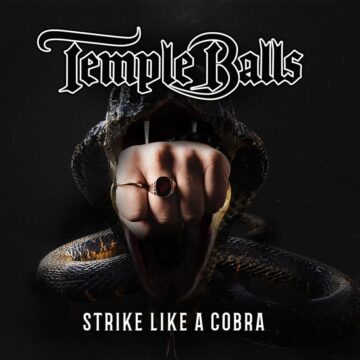 “Temple Balls‘ third studio album Pyromide highlights the problems that the Covid pandemic has caused for so many new record releases. It is simply so difficult for a band to promote a new album without the ability to play concerts. Two videos for the songs “Thunder From the North” and “T.O.T.C.” were released in advance of Pyromide (that saw the light of day on April 16, 2021) and there was one more lyric video for the track “What Is Dead Never Dies” that came out on the album release date. The band members were giving interviews to various media outlets including Sleaze Roxx prior to and around the time of the album release.

However, once Pyromide was out for a few weeks, the promotional push behind the album seemed to suddenly stop. Temple Balls bassist Jimi Välikangas was cognizant of the problem since when I asked him in early May 2021 what were the band’s plans to promote Pyromide, he replied: “To be honest, I don’t know. I guess we try to be more active on social media and stuff, but heavy metal belongs on the stage. We write new stuff and hope that this shit is over as soon as possible.” Unfortunately, this has resulted in Pyromide likely not getting the recognition that it deserves and had the album been at the forefront a little more and I hadn’t forgotten about it for six months or so, I think that it could have finished even higher on the Sleaze Roxx’s Top Ten Albums of 2021.”