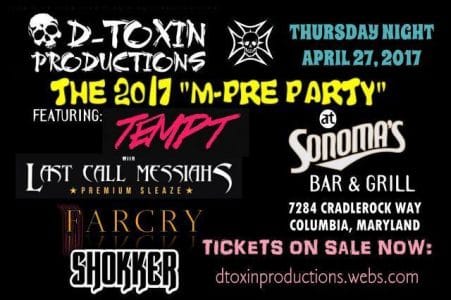 Four bands have been announced today to take part in the M-Pre Party‘s 2017 edition. They consist of Tempt, Last Call Messiahs, Farcry and Shokker, all of whom have previously been featured on Sleaze Roxx.

Back in January of this year, M-Pre Party founder and organizer Dave Dillman spoke exclusively to Sleaze Roxx and explained what prompted him to organize the event: “I actually thought there was a void that could be filled by the ‘M-Pre Party.’ There are so many hard working younger bands that hold true to the ’80s hard rock/glam/sleaze sound that need to be heard. I wanted to give people who love the same type of music that I do an opportunity to see some of these young bands. I also wanted to give these bands a chance to get their music heard. It’s a win/win for both the bands and the people who attend.”

In terms of the criteria that Dillman sets out to choose each year’s M-Pre Party line-up, he stated: “I pretty much stick to the same criteria each year as far as what I look for to fill the ‘M-Pre Party’ line up. First and foremost, the bands must have original music and deliver live. I also have to like the bands myself. I would love to be able to say that money didn’t have anything to do with it… but I can’t. The line up each year does have to work financially.”

Tickets for the 2017 ‘M-Pre Party‘ can be purchased from DToxin Productions.

Our album, Runaway is available June 17th 2016 on Rock Candy Records. Purchase it at Amazon and other outlets!

This is the first single from the upcoming “Sermons of Debauchery” CD by Raleigh, NC sleaze kings, Last Call Messiahs.

Finally making thier debut appearance at Firefest 2012 from New Jersey USA I give you Farcry.