New York rockers Tempt have released a video for their song “Under My Skin” from their debut album Runaway. The group has been receiving a lot of attention recently with none other than Def Leppard sharing their video for their cover of the UK rockers’ classic “Women.” 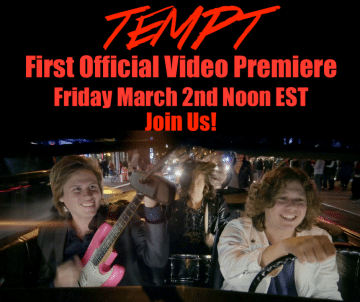 “NYC based rockers Tempt are releasing their first official video and they are getting an extra boost from rock legends Def Leppard who shouted out their video cover on their social media as an “Awesome Job”! The magnanimous Leps’ and their fans are embracing young Tempt’s personality, passion and perseverance, breathing much needed life into every rocker’s heart. Social media is over 500,000 views and climbing! The comments shared on Def Leppard’s Facebook, Instagram and Twitter accounts in response to their praise of the young band prove that Rock and Roll is alive and well.

“The Hysteria album is my Sgt. Peppers, the songwriting, the playing , the arrangements and the production are just amazing”, said guitarist Harrison Marcello. “My iTunes counter has me at 10,000 listens and I’m still learning from it.” “Ringo Starr recently lamented the fact that young bands were not being helped out by more established artists anymore, added singer Zach Allen “but here are the Def Leppard guys extending a helping hand to us and it means so much especially when we are right now releasing our video for “Under My Skin.”

The video for “Under My Skin” was shot on location throughout New York City. It features the band performing in a classic Chrysler 300 as they travel through their hometown ending in Times Square. “The response we got from people was nuts, exclaimed drummer, Nick Burrows. “Everywhere we went on the shoot people were just digging the music and had huge smiles on their faces. We all had a great time.””

Sleaze Roxx stated the following in its review of Runaway: Overall, Tempt‘s debut full-length album Runaway is a winner and puts the group on the short list of very good melodic rockers that I want to hear more from. It seems that the sky’s the limit for these guys and I am truly looking forward to see what they come up with next. Hopefully, it will be something with a slightly harder edge to it rather than a more keyboard oriented effort, which would likely have Tempt challenging for the Sleaze Roxx’s Top Ten Albums of the Year.”

Tempt‘s “Under My Skin” video:

TEMPT – UNDER MY SKIN Official Video