Dreams do come true as New York melodic rockers Tempt will be opening for none other than Bon Jovi at Madison Square Garden in New York City, New York, USA on May 10, 2018. 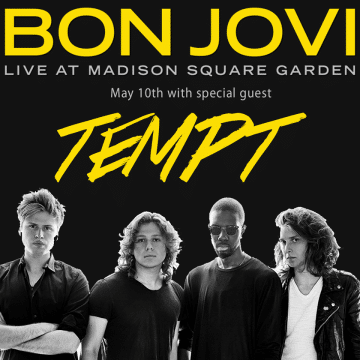 “Thanks to 102.3 WBAB and Bon Jovi and most importantly all of YOU for making this happen!!!

Best wishes and continued success to all of the other wonderful bands that entered.”

Sleaze Roxx stated the following in its review of Tempt‘s debut full-length album Runaway: “Anytime that a label such as Rock Candy Records, who predominantly only re-issues older albums from established or once established acts, decides to take a chance on a new band, that label has my attention. The reason of course is that there must be something really special with the new band for a label such as Rock Candy Records to give it its Cadillac treatment….

Overall, Tempt‘s debut full-length album Runaway is a winner and puts the group on the short list of very good melodic rockers that I want to hear more from. It seems that the sky’s the limit for these guys and I am truly looking forward to see what they come up with next. Hopefully, it will be something with a slightly harder edge to it rather than a more keyboard oriented effort, which would likely have Tempt challenging for the Sleaze Roxx’s Top Ten Albums of the Year.”

Tempt‘s “Under My Skin” video:

TEMPT – UNDER MY SKIN Official Video