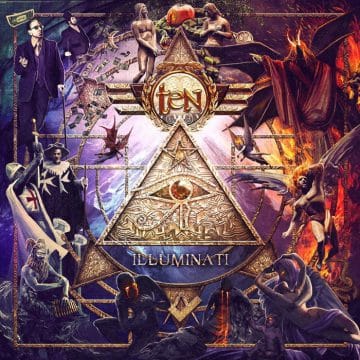 “The British Melodic Hard Rock band TEN unveiled today the new music video from their brand new (14th) studio album entitled Illuminati, which was released on the 9th of November, 2018 via Frontiers Records.

Hot on the heels of last year’s Gothica, UK hard rock stalwarts TEN/Gary Hughes are returning with a new album, Illuminati! The album promises to be one of the hallmarks of their 22+ years career, where fans will easily spot all the trademark textures and flavours they have come to expect from TEN, with a consistent and solid spark of creativity throughout. Illuminati continues to build upon the rich legacy that the great British rockers have established in their 20+ year career.

Illuminati was produced by Gary Hughes and mixed and mastered by Dennis Ward. TEN’s longstanding professional association with Dennis has been ongoing since he mixed their 2011 album, Stormwarning and has always guaranteed albums with stunning sound and production.

Subscribe here for more videos – http://radi.al/SubscribeFrontiers | From the album ILLUMINATI. Get your copy NOW: http://radi.al/TenIlluminateFollow the “N…