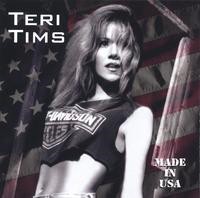 It is with great pleasure that Z Records announce the signing of Teri Tims — the label’s first ever female signing.

Z Records will be rereleasing Teri’s classic early ’90s debut, fully remastered with bonus material, on July 16th. Over the years illegal and sonically below par bootlegs have been seen but the revamped reissue will finally do justicefor this essential slab of melodic rock.

The current deal with Z Records will also include a brand new studio album which will be released during the autumn of 2012.

Teri Tims made the following statement, “Just want to let everybody know that the Ragin’ Cajun (that’s me!) is back with a new deal on Z Records for a new studio album to be released late October 2012. Z is also re-issuing mylast album (my fav). It has been re-mastered/repackaged beautifully and scheduled for a July 2012 release! Mark Alger definitely knows how to make a southern girl happy!”