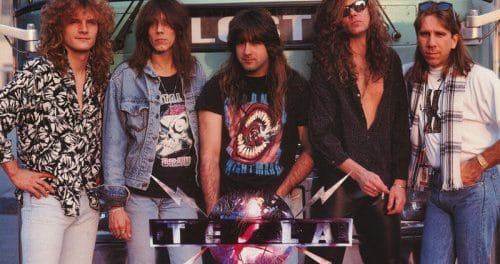 Tesla drummer Troy Luccketta was recently interviewed by eonmusic and was asked whether he misses not having guitarist Tommy Skeoch in the band.

Luccketta advised: “I’ll be honest with you. I just so wish him well. I hope he’s okay doing what he’s doing, and there’s things I definitely miss about Tommy. He brought a lot to the band, so, certainly I’d never want to discount the chemistry and what he 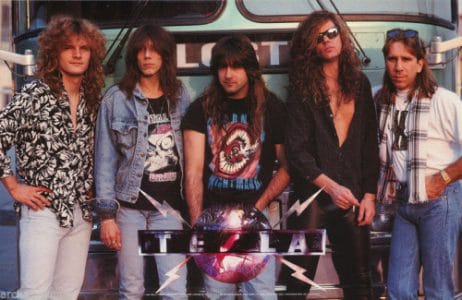 was in the first 10 years that created this sound. And then bringing Dave [Rude] in, Dave’s been such a great player, and key factor in the last 13 years, so the transition just seemed, again, pretty normal and organic the way it happened, so he seems like the perfect choice for the band, and a great performer.”

Skeoch was apparently fired from Tesla back in 2006 as he stated in an interview with Trunk back in 2016: “It was ummm. I bet I was fired. I would say. It was like at that time, I was being vocal about. I didn’t know if I wanted to go on being in — because we were turning into a nostalgia act at that point. And that’s OK. There’s nothing wrong with that…. Something about me knew that me being out there with all their down time, and then doing a show, and then down time, and then doing a show the next night and then a day off. Just a lot of down time. It was not easy. For whatever reason, my head just couldn’t take the down time. It was killing me.”

Wikipedia states the following about Skeoch‘s difficulties and departure from Tesla (with slight edits):

“After the release of Bust A Nut, Skeoch departed because of his struggle with substance abuse. He rejoined after completing rehab, only to depart again months later. The band moved forward as a four-piece for a short while. However, it wasn’t long before Skeoch briefly joined up with solo artist Marshall Coleman‘s band to support his solo career, only to see a departure of Marshall soon after. This band eventually morphed to include Jeff Keith and resurfaced as Bar 7 with a single “Four Leaf Clover”, from the album The World Is a Freak. Brian Wheat formed Soulmotor and Frank Hannon, Moon Dog Mane, while Troy Luccketta worked with several local artists including the Bay Area’s One Thin Dime.

After a break of six years, the Sacramento Bee reported that the band had reformed in 2000 with the help of local radio personality Pat Martin of KRXQ. The band played an emotional sold out show at ARCO Arena in Sacramento on October 25, 2000. Soon after they recorded the double live album Replugged Live. In 2002 they were featured in the Rock Never Stops Tour alongside other 1980s rock bands. 2002 saw the release of a further live album Standing Room Only which is just a single CD version of Replugged Live. In 2004, they released their fifth studio album Into the Now which debuted on the Billboard album chart at number 30. The album was well received by fans and the band was featured on Jimmy Kimmel Live!.

In the summer of 2006, the band embarked on the Electric Summer Jam Tour without guitarist Tommy Skeoch. Skeoch had left the band indefinitely to spend time with his family, and, as he later revealed on “The Classic Metal Show“, other reasons; particularly his problems with substance abuse. Scott Johnson of the Sacramento band Rogue filled in for a time on this tour. Eventually Dave Rude replaced Skeoch permanently.”

You can read the rest of the interview with Troy Luccketta at eonmusic‘s website.