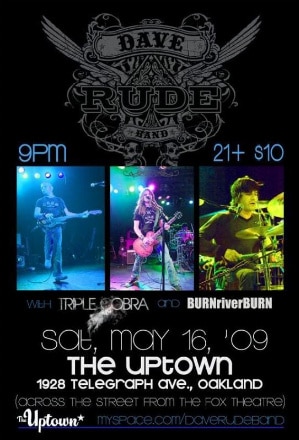 Tesla guitarist Dave Rude has posted a brand new song entitled Patiently Waiting online at www.myspace.com/daverudeband. The Dave Rude Band song is an unmastered rough mix from the band’s 2009 live-in-the-studio sessions with Juan Caipo at Rockolito Studios in Oakland, CA and will only be online for a limited time.

The Dave Rude Band’s 2007 self-titled debut is available for sale at cdbaby.com/cd/daverudeband, and the band will be playing the following live shows, May 16 at The Uptown Nightclub in Oakland, California and June 6 at Cafe Du Nord in San Francisco, California.

Singer/guitarist Dave Rude put together this hard rock power trio in late 2005 with bassist Marco Guzman and a succession of drummers. After gigging heavily around their native SF Bay Area (as well as the rest of the West Coast and New York City) the classic rock band Tesla recruited Dave to play guitar (he’s since become a full-fledged member).

Following a break during which he toured and recorded an album with the multi-platinum road veterans, Dave and Marco hooked up with drummer Josh Schmidt in ’06 and immediately became all too familiar with the sweaty confines of their tiny rehearsal studio. It was here they developed and refined their unique new twist on classic rock’n’roll–big riffs; fat, dance-able grooves; and very melodic, sing-a-long John Lennon-esque vocals (minus the campy artifice and phony retro-vibe that often accompany such descriptions).

Hitting the studio with Grammy-winning producer Michael Rosen (Metallica, Santana, Rancid, etc.) they recorded 6 new songs that have already been getting airplay on the major SF rock radio station 107.7 FM the Bone. More jam-packed West Coast shows have followed for the Dave Rude Band as they plan tours, continue writing, and look for the right management and label deal. They recently released their new, self-titled EP in December 07.