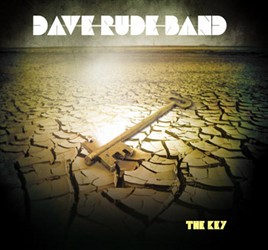 Tesla guitarist Dave Rude delivers the goods with his latest hard rock offering ‘The Key’, due for release on June 4th through Rat Pak Records.

This 10 song, riff laden extravaganza, captures the true spirit and essence of American rock ‘n’ roll music. Produced by Marc Kapetan, ‘The Key’ showcases both Dave’s solid guitar playing skills, and unique songwriting ability. Along with bassist Marco Guzman, drummer Josh Schmidt and Dave’s signature guitar style, this release offers up a straight-forward mix of hard rockin’ cuts that will satisfy any and all fans of the genre. Also making an appearance on the song “On My Own Again” is Tesla bandmate and drummer Troy Luckketta.

Pre-orders of the album and an ‘Ultimate Fan Bundle’ are available now at www.ratpakrecords.com/daverude.

‘The Key’ track listing:
The Key
Yours to Hold
Afterlife
On My Own Again (featuring Troy Luckketta)
Iron Grip
Own The Night Forgive Her
One Night, One Day
Sledgehammer
Charlie Mansion