Tesla guitarist Frank Hannon has released a video for his solo song “Never Slowin’ Down.” 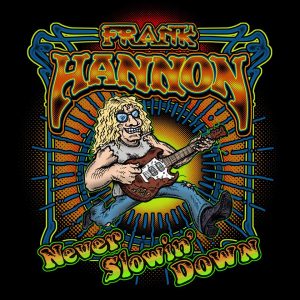 Hannon‘s website bio states: “Apart from being a founding member and lead guitarist of the band TESLA, Frank Hannon is also a singer / songwriter as well as a producer. Having a passion for all genres of music, he produces many solo albums and recordings for other artists in his RedHawk Records recording studio in Northern California.

Playing Electric and Acoustic guitar, Piano, B3 organ, Bass and just about any instrument he can get in his hands, Frank loves to experiment with Blues, Country, Folk and Jamming improvising styles beyond what he is most famous for in the “Rock” genre. His mother introduced him to to psychedelic sounds of Jimi Hendrix, Grateful Dead, and others from the San Francisco era as a child, then he developed his loved for hard rock throughout high school in the 80’s. In recent times, Frank and company have come full circle as TESLA is touring with their pals Def Leppard again some 30 years later, and Frank is tapping into the influences of his childhood roots with his solo music.

“What I love about music is you can always learn something new..especially from the roots of old music…I will be 50 years old this year and musically it is the best time of my life!” ~ Frank Hannon“