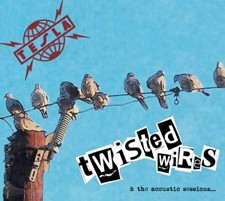 The album will feature 6 tracks that were recorded back in 2005 at bassist Brian Wheat’s J Street Recorders studio (which are the last recordings with original member Tommy Skeoch), 6 newly recorded tracks which include acoustic remakes of songs from their entire catalog, and two brand new songs called “Second Street” and “Better Off Without You.” ‘Twisted Wires & The Acoustic Sessions’ is the follow up to 2008’s ‘Forever More’.

2011 also marks the 25th anniversary of the band! To stay updated on everything Tesla visit their Official Site at www.teslatheband.com and the Facebook page at www.facebook.com/teslatheband.

In related Tesla news, you can now pre-order SoulMotor’s album ‘Wrong Place At The Right Time’ at this iTunes location. A project by Tesla bassist Brian Wheat, the new SoulMotor album will be officially released on June 28th.