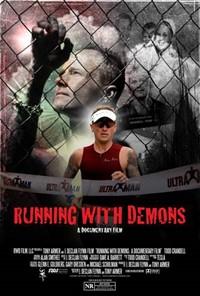 Tesla is probably most well-known for its hit songs “Love Song”, “Signs”, and the smash hit album ‘5 Man Acoustical Jam’ which started the acoustical performance craze of the 90’s. They’ve now added something new to their repertoire; the Original Soundtrack for the new documentary film ‘Running with Demons’.

This new documentary film by Tampa Bay Area filmmakers Tony Armer and J. Declan Flynn has just been released for distribution to a worldwide audience.

The film follows Todd Crandell, Professional Counselor (PC) and Licensed Chemical Dependency Counselor III (LCDC III), who battled severe alcohol and drug addictions for 13 years. Devastating relationships with family and friends and shattering the promise of a professional hockey career. The film follows him through Ultraman Canada — a grueling three-day, 318.6 mile triathlon in the rustic back-country of Penticton, British Columbia with a camera crew in his face the whole way. The film is a unique and stark glimpse into the life of an ex-addict whose passion of saving people’s lives could cost him his health and his family.

In the process of rebuilding his life, Crandell realized traditional recovery programs weren’t enough. He needed something more. He chose the grueling Ironman triathlon. His actions were inspiring others and led him to form the organization, Racing for Recovery, which offers counseling, support group meetings and events across the country in an effort to promote a lifestyle of fitness and sobriety. Todd has dedicated his personal and professional life to achieving the goal of preventing substance abuse in adolescents and individuals, as well as offering a positive alternative to those currently battling addiction. Todd now travels the world speaking to groups and individuals to convey one important message – “With Sobriety, Anything Is Possible.”

Todd has been featured in the past by ESPN, CNN, Sports Illustrated, the NY Times, Runner’s World Magazine, and numerous other media outlets. This is the first time however that a film crew has chronicled his struggles both physically and emotionally as he competes in a 318 mile triathlon while battling deep personal struggles. It is also the first time in Ultraman Canada’s 27 year history that a film crew was given unprecedented access to a competitor.

While the band did the original songs featured in the film, Tesla guitarist Dave Rude also composed an all original score as well. Dave talks about scoring the film on his YouTube channel at www.youtube.com/watch?v=4gbIcqBd7vE.

“Running with Demons is about perseverance in the obstacle-laced journey of life. The film proves that there can in fact be a light at the end of the tunnel. It should be a mandatory rule that if one hits rock-bottom, they need to hear Todd Crandell’s story”. Joe Belcastro – Florida Film Critics Circle (FFCC), Tampa Tribune and CBS Tampa.

“We couldn’t be more pleased with the how the film turned out, and we’re excited to continue to share Todd’s story of redemption and hope to those people who may not already know Todd’s story” commented Tony Armer and J. Declan Flynn, co-directors and producers of the film.

The film can be purchased via download, Blu Ray or standard DVD at www.racingforrecovery.com/shopping/running-with-demonsor download the film to rent or own at Amazon.com