Tesla To Release ‘Alive In Europe’ On April 23rd 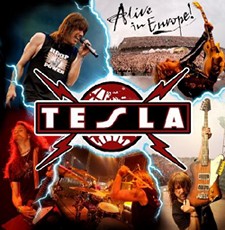 Tesla are to release a brand new live album, Alive In Europe, on April 23.

After 25 years, 12 albums, over 2,500 shows, over 16 million albums sold worldwide, Tesla is stronger than ever, on the heels of the release of one of the band’s most successful studio releases to date Forever More.

As a testament to a very creative and productive chapter in the history of the band, Tesla release what can be considered a true “electric” live album recorded at various locations during the European shows in the summer of 2009.

Alive In Europe! is filled with sweltering live songs including all the band’s classics such as “Modern Day Cowboy”, “Signs”, “What You Give”, “Little Suzi” and songs from the latest release such as the single “I Wanna Live”, the album title track and more.

A sincere and truly live sounding album which closes a chapter in the band’s history and shows a vibrant band ready for the next step.

Alive In Europe Tracklisting:
Forever More
I Wanna Live (MP3 sample)
Modern Day Cowboy (MP3 sample)
Heaven’s Trail
What a Shame
Shine Away
Love Song (MP3 sample)
What You Give
The Way It Is
Breakin’ Free
Hang Tough
So What!
Signs
Lil’ Suzie
Into the Now