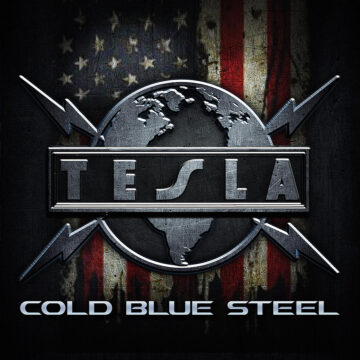 “The video, directed by Brandon Gullion and produced by guitarist Frank Hannon is raw and high electric energy that takes fans back to the roots of TESLA. “Cold Blue Steel” is influenced by current events of the world, just like our debut single “Modern Day Cowboy” (1986) and touches on the subject fairly and open-minded by asking “what’s to blame?” when it comes to violence in the world” states Frank Hannon (founding member and guitarist). “More importantly, the recording and production of the song and video are kept raw and real, just the way TESLA fans want to see and hear us. We are survivors and have been rocking for 35+ years!””

Sleaze Roxx stated the following in its review of Tesla‘s last studio album Shock: “Overall, Shock is a good record. A little soft at times. But, it holds up to the Tesla classics well. If you’re a fan of Teslafrom the glory days, this album slides in to that collection easily. If you are looking for a more dirty, heavy sounding Teslalike Into The Now or Forever More, this one has some stuff for you but is certainly a departure from that direction. But, this is not a modern Def Leppard album as many had feared. Those that want to pan the album as such will have plenty to point at on the record to support their negativity. But, those who give it a chance will find a really good collection of songs with a really talented band and a singer who sounds better than he has in years thanks, in part, to producer Phil Collen.”